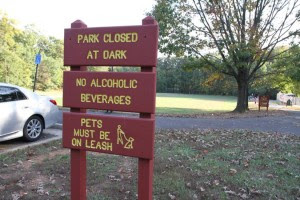 “Great Parks, Great Communities” is the clichéd theme of the Fairfax County Park Authority.  And the theme may be true, but the Park Authority is promising — a promise it may well not fulfill — Tysons and Reston urban areas among the most poorly parked-served areas among the top cities in the country.
It raises the question, will poor parks mean poor communities?

As Reston Now suggests in its April 29 article, county park availability standards for the newly urbanizing areas of the Dulles Corridor are less than half of the county-wide “suburban” standard — and the Park Authority plans to put fewer parks in Reston’s station areas than in Tysons because we have parks and facilities elsewhere.

Here’s where we are in the arithmetic of public parks.  The county standards described in Tysons’ and Reston’s plans shoot for providing about 1.7 acres of park per 1,000 residents.  That’s about 154 acres of parks in Tysons and 95 acres in Reston — if fulfilled.

Now let’s see how that stacks up. A national non-profit, the Trust for Public Lands, tracks park availability annually for the 100 largest cities in the country. When Fairfax County’s urban park standard is included in the ranking of acreage per 1,000 residents, both Tysons and Reston rank in the bottom 5 percent of all the cities.

Moreover, despite having some of the most expensive real estate in the country, Manhattan has been able to set aside 18.3 percent of its land for parks.  That’s more than 10 times the share planned for Tysons (1.4 percent) and more than three times the goal for Reston (5.6 percent).

And the county has no intent to meet its own standard for Reston because, as the Reston Comprehensive Plan says, “Need generated in the TSAs should primarily be met through the integration of urban parks, recreation, and cultural facilities within the mixed use developments of the TSAs. To supplement these parks and facilities, elements of the larger Reston area’s robust park and recreation system (outside of the TSAs) may be able to be improved to help meet the needs of future residents and employees.”

So, yes, the County envisions that the park and natural areas that we as Reston Association members own and pay for annually in our RA assessments will count against its obligation to meet county park requirements. It is the grinding down of Reston as a special place to live, work, and play to just another mediocre county sub-division.

But that is only half the story. The other half has to do with the availability of facilities within the parks, especially space-consuming recreational fields.

Reston falls way behind both:  The planned 56,000 residents of its station areas will have “at least” (and don’t expect more) three athletic fields or one for every 18,700 residents.  That’s about half the ratio found in Manhattan. It will be the worst in the country among TPL’s 100 top cities.

The rationale, as explained by the Park Authority’s Chairman Bill Bouie, “There is so much here (in Reston) already,” says Bouie. “We don’t have nearly the assets in Tysons.”

Wait a minute!  The county athletic fields in Reston serve the 60,000 people who already live here and, as Mr. Bouie knows well, are fully utilized by Restonians and thousands of people who live beyond Reston.

The picture painted here is that the county has no intention of sustaining Reston as a model planned community and, indeed, wants to take private Reston property — RA’s common areas — so that it can meet its so-called park commitment on the cheap. Actually, most RA members would like to preserve their common areas, especially their jointly-owned natural areas, rather than turn them into athletic fields to make up for shortfalls in the County’s willingness to fulfill its obligation to the community.

It is hard to imagine a more cynical county approach to providing basic, even substandard, public park services to Restonians.  Not only will Reston’s urban residents have about the worst park availability in the country, but Restonians will be forced to absorb the overflow into their privately-held common land — and pay for it.

Soon we will be living with poor parks and a much poorer community as the result.