RA CEO Cate Fulkerson will report to the RA Board of Directors this Thursday on the financial situation of Tetra.  The bottom line of the costs to date and forecast until the end of the year is that RA expects to spend more than one million dollars on Tetra by the end of the year.  In broad terms, that includes:


Below is the full RA spreadsheet with several rows added at the bottom (light blue and yellow) that bring some of these totals to the surface. 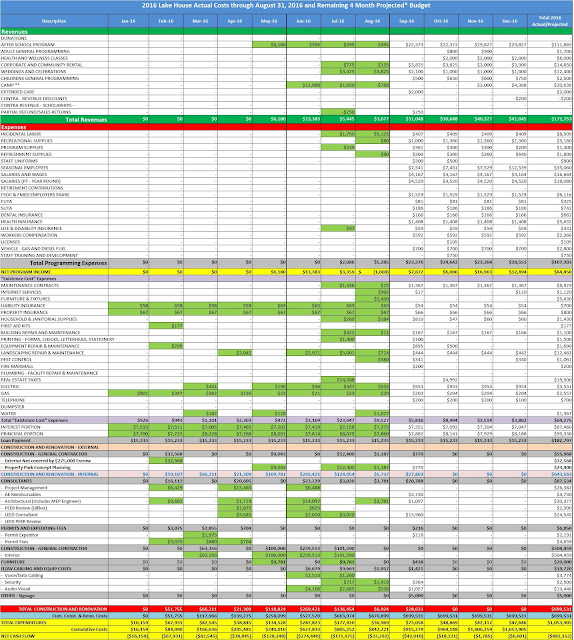 To facilitate a comparison with RA’s “fact sheet” published March 2015 to help sell the referendum, here is the pro forma spreadsheet it offered then: 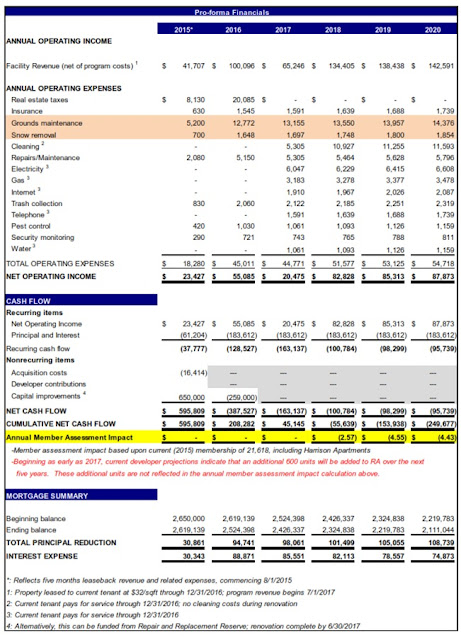 This total cost for the Tetra effort is more than double the total cost RA projected for Tetra in its March 2015 “fact sheet” on the Tetra purchase.   Here are the costs as RA projected them then and now:
The total projected costs in the "fact" sheet were  $487,623.


Yet somehow, despite losing the $100K lease on the Tetra building this year, RA is forecasting operating revenues of $171,753 this year.  That forecast program revenue comes from an RA effort to accelerate the renovation of Tetra to enable the launch of some programs as of about mid-year.   For what it’s worth, RA’s project income this month is down $20K from last month, and we expect similar cuts in projected income next month when RA reviews its forecasts to end of the year.

This is pathetic management of an unjustifiable project.  We hope that the “independent” audit team can provide some explanation of how Restonians were so badly misled by their leaders.

The Proposed Reston Transportation Tax is a Fraud

“The simplest explanation is usually the best one.”  Occam’s Razor

For the better part of a year, the Fairfax County Department of Transportation (FCDOT) has been trying to persuade a group of Restonians called the Reston Network Analysis Group (RNAG) appointed by Supervisor Hudgins that some or all of Reston homeowners need to pay an added tax to improve the road networks around the Metrorail stations.

The need to improve the roads and intersections, FCDOT says, is obvious because of all the development that will be going on around these station areas in the decades ahead and, of course, Restonians should pay at least a share for those road improvements.  In fact, FCDOT continues, we have the model established in Tysons were residents are paying added taxes to help defray the costs of roadway improvements there.

FCDOT is so convinced of the importance of Restonians paying an added property tax to help cover the cost of these improvements that it has offered up no less than ELEVEN different tax scenarios for the resident RNAG to consider. 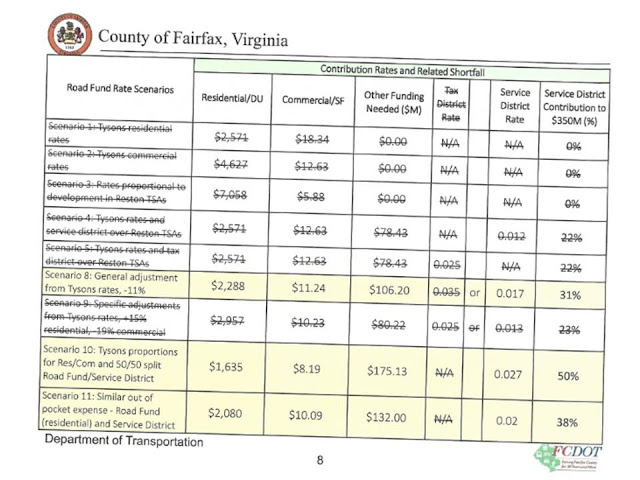 All of these 11 scenarios somehow relate to how the taxes at Tysons were developed, which is irrelevant to Reston unless, unbeknownst to us, whatever features the Tysons’ model(s) have are written on a stone tablet and brought down from the mountain top.   What about the models for other redevelopment areas such as Baileys Crossroads, Seven Corners, or the linear Highway 1 re-do in Mt. Vernon?  Reston is, in fact, its own beast with its own features, needs, opportunities, issues, and goals—and it is unclear that any of these characteristics are the same as they are in Tysons.   Yet FCDOT and RNAG have never taken a minute to examine these issues.  FCDOT has just presumed that whatever fits in Tysons will fit in Reston.

Moreover, all eleven scenarios are complex involving different types of improvements, share splits between public and private (which, of course, don’t line up with citizens normal understanding of those two terms), residential versus commercial, and so on.  The only reason to introduce all these complications is to confuse the issue of who should pay for the roadway improvements by focusing on irrelevant issues.  It is very much like a three-card Monte or shell game:  Introduce a lot of motion (or commotion) and re-direct attention to confuse the mark.

The bottom line is that there is no compelling reason that Restonians should pay any added property or other taxes whether through a tax service district (TSD) covering the transit station areas (TSAs) or a special tax district (STD—a la the Reston Community Center STD) covering all Reston.

Using Occam’s razor, that a simple, straightforward explanation is the best one, we believe the best answer to financing the needed roadway improvements is, “Those who benefit financially from the Reston roadway improvements should contribute financially to their implementation.”  There are three parties to this effort:  The County, the developers, and the residents.


In contrast, Reston’s residents are guaranteed to see worse transportation capabilities.  FCDOT has guaranteed this by setting a lower standard for managing peak traffic flows that will not only hurt those who live in the TSAs, but those Restonians and others who travel to or through them.  Moreover, they are also guaranteed worse local bus transit service because FCDOT states that it will not increase local bus service, just move the existing routes around.  So, yes, the goal of the County is to make moving around Reston more difficult, but it still it wants to charge some or all Restonians a tax for this more limited capability.

The only reasonable and honest rationale for the new Reston transportation tax—again, using Occam’s Razor to look for a simple, straightforward explanation—is that the County Board wants to create a new property tax revenue stream that it can adjust, meaning increase, at its prerogative anytime indefinitely.

In short, the elaborate financial calculations and manipulations by the FCDOT for the RNAG are simply a ruse—a straight-up fraud—to create a new property tax revenue stream for the County that is unlikely to be spent in full in Reston and will definitely make Reston mobility more difficult.

Act to stop it while you can.   Write to: