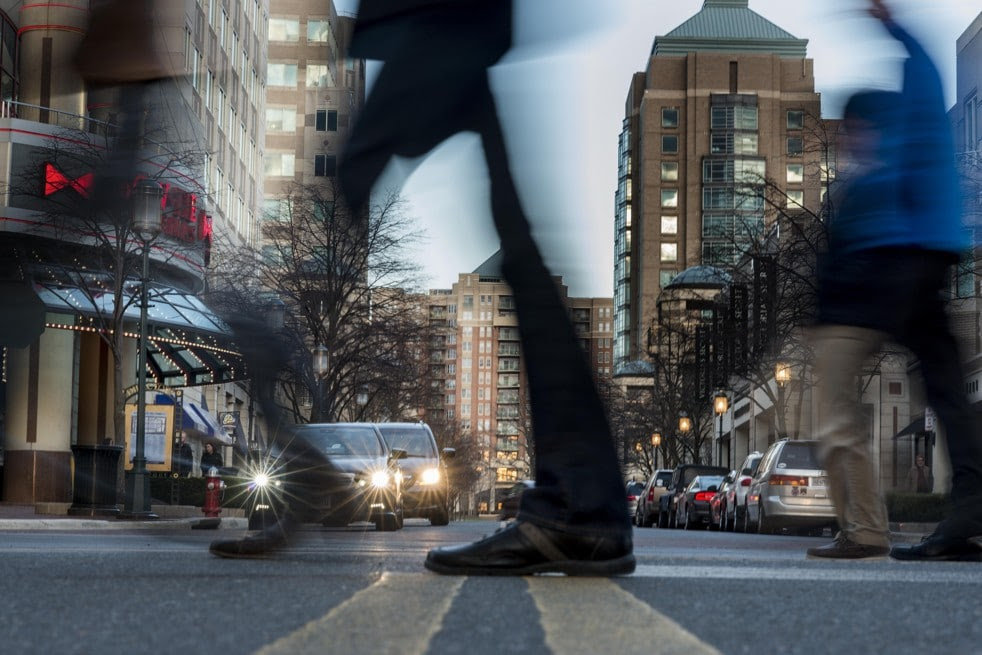 It will be years before we’ll know whether the vision for an urbanized Tysons Corner will become a successful model for re-inventing suburban areas. The long-range plan for overhauling Tysons is just four years old and Metro’s Silver Line trains have only been arriving there for three months. . .

But while multiple projects in Tysons, most notably Macerich’s Tysons Tower, are attempting to combine enough new uses to create dense, walkable areas, none are likely to catch Reston Town Center any time soon.

Working off a plan devised by Robert Simon 50 years ago, a four-block area of Reston Town Center combines 2.8 million square feet of office, 50 shops, 30 restaurants and three residential high-rises.
Tysons, to this point, still doesn’t really have any areas with a walkable grid of blocks, much less a neighborhood or node that dense. . .

(Sarah) Dreyer (Director of Mid-Atlantic research for Cushman & Wakefield) points out that some of the newer offices in Tysons are shaping up as strong competitors to buildings in Reston, particularly those that can offer closer access to the Silver Line than Reston Town Center will be able to. But the plan for Tysons is four years old. The plan for Reston is 50 years old. That’s a 46-year head start.

To be fair, the original plan for Reston Town Center's current development was approved a mere quarter-century or so ago, not a half-century ago, but two decades is still a heck of a head start.

Over the longer term, however, the more important point is that Tysons is planned for much more intense mixed-use development than Reston Town Center or either of Reston's two Metrorail station areas.  That Reston plan was updated last year with much greater commercial and residential density  as part of the Reston Master Plan process.  Indeed, the planned infrastructure to support Reston Town Center's development would choke trying to support the kind of development planned at Tysons.  In fact, we believe its transportation, education, and parks & recreation planning for Reston Town Center is terribly inadequate even for the densities now planned there and well below existing County planning standards and guidelines. As a result, the Town Center area will be less able to handle traffic and meet the recreational needs of its residents, workers, and visitors than Tysons if they both develop as their new plans propose.

Maybe long term Tysons will turn out to be the better, more walkable, more accessible, more attractive mixed-use urban area than Reston's Town Center.  We certainly hope not, but that is what the two plans currently offer!