Photo of the Day: Reston Heritage--The A. Smith Bowman Distillery 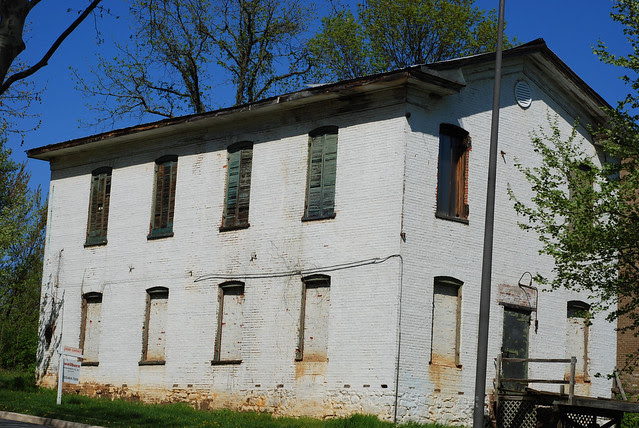 
A. Smith Bowman's distilling roots date back to the years before Prohibition. In 1927, after the Repeal of Prohibition, Abram Smith Bowman and his sons relocated to Virginia continuing the family tradition with the distillation of bourbon. The original distillery was located on the Bowman family homestead in Fairfax County, Virginia called Sunset Hills Farm.

Wikipedia adds the following about the building:


The building in which the distillery originally operated was constructed circa 1892, serving as the town hall for Wiehle, as well as a church. It was listed on the National Register of Historic Places National Park Service in 1999, and has been the subject of several rezoning applications.  A proposal to construct condominiums on the site was approved September 24, 2007.  An earlier version of the proposal mentioned 8 units as new buildings (on 0.23 acres), in addition to constructing 3 units within the historic structure, while noting that it replaced a planned use of the structure as cultural center (i.e., for the Greater Reston Arts Center).

Story goes that Bob Simon was actually testing the fine Virginia bourbon whiskey at the distillery shortly after it opened in 1934 when he came up with the new-fangled idea of a "planned community" in the wilds of northern Virginia linked to Washington by the fine Washington & Old Dominion rail line.  One could also ride a horse, take a carriage, or drive one of Mr. Ford's Model T's down the Leesburg Pike to Tysons Corner (back when it was just a corner) and then on to Old Dominion to Chain Bridge to get to the capital.

OK, that's not exactly how it went down, but it's easy to imagine!  What is true is that this century-old building has served as a town hall, a church, and a distillery.  Seems like a pretty good lifetime mix of uses!

Email ThisBlogThis!Share to TwitterShare to FacebookShare to Pinterest
Labels: Photo