This is an extended version of a letter by Terry Maynard published in RestonNow.  It includes more details and graphics.

As a Restonian who has worked hard on Reston planning and zoning for more than a decade, I was stunned by the letter, linked to in this RestonNow article, signed by 17 people, many of whom are associated with the Greater Reston Chamber of Commerce (GRCOC), to Supervisor Hudgins.  The letter, signed by GRCOC Board Chairman Charlene Wheeless (Bechtel), GRCOC President and CEO Mark Ingrao, GRCOC Executive Committee Member Mike Jennings, and Mark Looney (GRCOC representative to the Reston Master Plan Task Force—RTF—and land use attorney), was so full of inaccuracies and untruths it could readily be labelled “fake news.”

One of the most stunning claims in the letter was that “Reston’s Comprehensive Plan was the product of a five-year planning process involving the full community.”  The fact of the matter is that the Reston community was marginalized throughout this timeframe and its contributions opposed by developers and ignored by the county.

Let’s take a look at what REALLY has happened in this near-decade effort to re-plan and re-zone Reston.

Only six of the two dozen primary members of the RTF studying Phase 1 (the transit station areas) were Reston residents who represented the interests of Reston residents.  They included representatives from three community organizations—Reston Association (RA), Reston Citizens Association (RCA), and Alliance of Reston Clusters and Homeowners (ARCH)—and three independent “at large” residents.  Another “at large” member from Herndon held views aligned with Reston’s community representatives.  Three of RTF’s members, including the chair of the task force, represented organizations promoting the extension of the Silver Line.  The rest, including the Reston Community Center, represented private and government development interests in Reston—more profits, more taxes.

No community representative, then or now, has opposed reasonable residential and commercial development in the transit station areas.  They have objected and continue to object to the excessive development proposed by private and county land use interests.

The Task Force recommended 27,932 dwelling units (homes for about 59,000 people) in the station areas based on study of multiple density and mix scenarios, a development level community representatives could live with.  That was set at 27,900 when the Board of Supervisors (BOS) approved the Phase 1 plan in early 2014.  It was a number Reston community representatives could live with.

Then that Phase 1 planned station area dwelling unit number was raised by more than half to 44,000 dwelling units (92,000 people) in mid-2015 by the BOS in the process of approving the Phase 2 plan without any community involvement or even foreknowledge.  This despite the fact the county insists it only revises plans every five years.

Community involvement in Reston planning was even more limited during Phase 2 (Reston’s suburban areas, all zoned PRC).  The community’s access to the Phase 2 planning process included only four county-led and controlled community meetings and an open house.   It was agreed that residential areas should remain “stable,” but the redevelopment of Reston’s village centers drew controversy.  Draft county language to require a comprehensive plan amendment (generally assuring some community engagement) to redevelop village centers was dropped from the Board-approved mid-2015 Reston Master Plan since it would make the redevelopment approval process more cumbersome.

Moreover, no meaningful funding has been committed to building any of the so-called “planned” infrastructure elements, all generally inadequate against even county policy standards, other than the library where a $10 million bond funding may disappear.

·       The school system just rejected funding to build a much needed high school in western Fairfax County (as proposed in the Reston plan) to accommodate “planned” growth.
·       Planning for parks serving station area residents remains a farce.  The county’s urban parks policy calls for 1.5 acres of park within walking distance (one-half mile).  That’s 138 acres of public parks for just the planned station area residents.  No public park land has been added so far.

·       The Transportation Department studied the Reston station area road system for two years and came up with a variety of improvement proposals, but the Board of Supervisors has not fully funded any street improvements in the Metro station areas, including the critical toll road overpasses.  Statements by the C/FCDOT and in the GRCOC letter that “a dedicated revenue stream is already in place” for transportation improvements are not true.  Yes, the county has revenue streams, but virtually none have been “dedicated” to Reston.

·       In a slightly different case, most of the $10 million in funds approved in a 2012 county-wide bond referendum to re-build Reston Regional Library has yet to be utilized and is caught up in a public-private partnership (PPP) to build the library, a new homeless shelter, and other public facilities along with housing in Town Center North.  Worse, any library funds not spent by 2022 will expire and a new referendum will be required.

Separate from the Reston planning process, the county amended the station area and Lake Anne Village Center “revitalization” zoning ordinance in mid-2016 to increase the allowable density in two urban mixed-use zoning categories, PDC for commercially-focused development and PRM for residentially-focus development.  Residential densities in these areas are now limited in density only by the Reston plan, including up to about 145 dwelling units per acre (FAR 4.0—305 people per acre) in the Reston Town Center station area core.

Now the county is proposing to amend the Reston Planned Residential Community (PRC) zoning ordinance to increase allowable community-wide population density from 13 to 15 people per acre in suburban Reston and increase the allowable density on a single PRC property designated “high density” from 50 to 70 dwelling units per acre, including the village centers and several so-called “hot spots.”

·       In its staff report on the proposed zoning density change, the county calculates roughly a quadrupling of planned housing in the village center areas from less than 1,500 to 5,800. 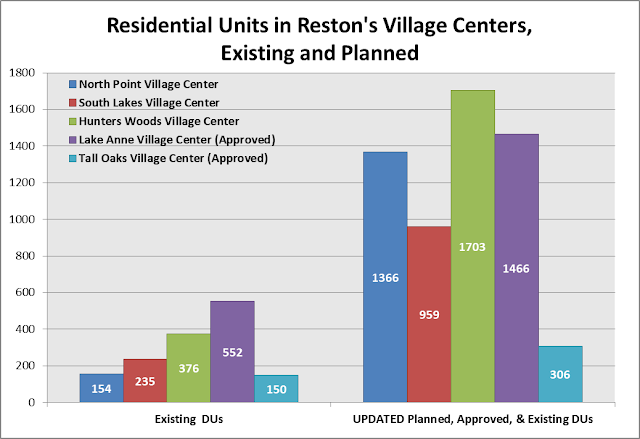 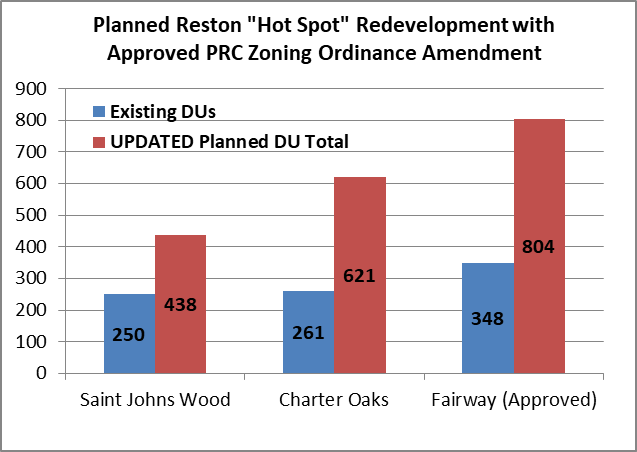 The bottom line is that Restonians have had limited access to the planning process throughout and their contributions and concerns have almost universally been ignored.

The cumulative effect of the new zoning in the station areas and the prospect of increasing the Reston PRC zoning density would be to allow Reston’s population to triple from its current 63,000 people to more than 180,000.  At the same time, there is little or no assurance of the arrival any time soon of needed infrastructure for transportation, schools, parks and open space, and more that would maintain Restonians’ quality of life as a model planned community.

Now it is imperative that Restonians rise up and stop the county’s ill-considered PRC density increase proposal driven by Supervisor Hudgins.  Attend the Planning Commission hearing on the PRC amendment at 7PM on January 23, 2013, in the Fairfax County Government Center wearing a YELLOW shirt.  The presence of hundreds of Restonians will be as great a message to the Planning Commission as the testimony of Reston’s representatives and residents.