Why should 30 Dwelling Units per Acre Be The Maximum Allowable Residential Density in Village Centers?

Several attendees of the “One Reston” community meeting on December 11th questioned the wisdom of the Coalition for a Planned Reston (CPR) proposal that the Reston plan should allow residential development up to 30 dwelling units per acre (DUA) in our village centers.  It’s a good question.  In part, I take the blame for the concern because I was too cavalier in addressing why we would propose that many DUs in Reston’s village centers.

I think it is important to actually see what development at 30 DUA over first floor retail might look like as the photo below shows.  What it does not capture from a village center perspective, however, is the parking and “central plaza” that the Reston plan calls for.  I would anticipate that a developer would build a parking garage the same height as the village center residences to meet county requirements for residential and retail housing because it would be too expensive to build it underground for this low level of density.  The central plaza, such as Washington Plaza at Lake Anne, should be significant in size and provide amenities like a playground and plenty of greenspace. 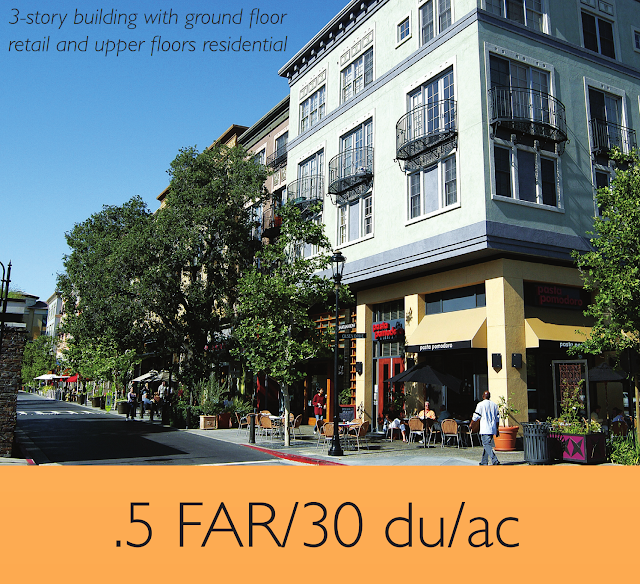 Now let me take a couple of minutes and explain why we think a maximum of 30 DUAs is a valid number for village center redevelopment using this small table based entirely on county policy, data, methods, and assumptions.

First, on average, Reston’s four remaining un-redeveloped village centers now average a little over 10 DUA with garden apartments and condos as well as townhouses within their boundaries.    It has been my observation that developers generally do not consider redevelopment unless they can at least triple the density of the existing facilities, residential or otherwise.   Limiting redevelopment to 30 DUA would make redevelopment economically feasible and help prevent developer legal action at blocking their “by right” development, but still set a tough ceiling on redevelopment.

Third, as presented by the county in its table of existing, approved, and planned development in the village centers, the current average potential development in them averages over 60 DUA, more than twice the maximum we are planning to propose.  Obviously, we believe limiting possible redevelopment there to 30 DUA would be a critical improvement in the Reston’s plan.

We appreciate that the prospect of tripling the residential density within Reston’s village centers will have a large impact on the surrounding area and may include residential over retail design.  We believe, maybe optimistically, that the Reston plan’s current requirement for any redevelopment to require a plan amendment specifying the proposed change and that that amendment must be developed with the surrounding neighborhood will be adequate to keep impacts on traffic, schools, etc., to a minimum.  In fact, this was the process that led to the plan amendment regarding Lake Anne Village Center.

On the other hand, in this Dillon Rule state, neither we nor the county is in the legal position of being able to prevent village center landowners from redeveloping their properties within reasonable guidance.  We think the 30 DUA threshold meets that requirement without giving up the quality of life of those who live nearby.