After finally admitting that renovations for Tetra were over budget by $430,000 in May, RA put in place a new budget--new revenue stream, new cost estimates, top to bottom, and six months later RA expects to be another $29,000 over its new Tetra budget--an additional seven percent in seven months, including nearly $6,000 over its renovation budget.

At its December 19th meeting earlier this week, the Fiscal Committee received its November financial report on Tetra (see p. 11) mandated by the RA Board.  What it shows when you cut through all the details is that RA will spend more than $29,000 over the 2016 budget it set for itself just seven months ago.  Here's a spreadsheet that summarizes that report: 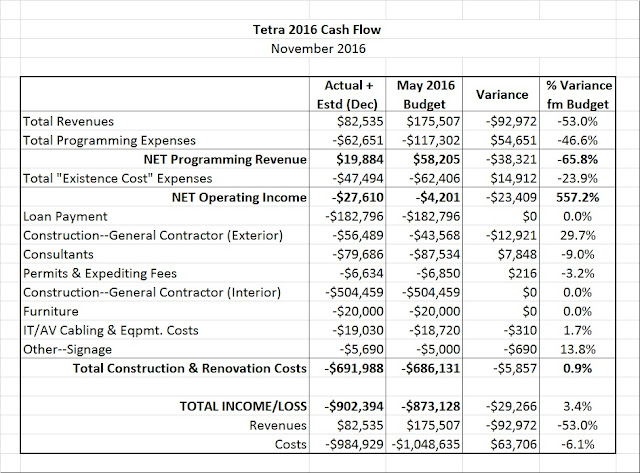 Several observations are possible by looking at this table:
Aside from the horrible mishandling of the Tetra purchase and renovation, this cash flow analysis suggests that RA can not put together a reasonable budget for a new activity over even a short period of time.  Clearly, more work is in order to straighten out RA's house--as well as Tetra.
Posted by Reston 2020 at 5:35 PM