Tetra renovation nearly half a million dollars over budget this year alone.

UPDATE, Noon, May 23:  RA financial data through April 2016 just now available to us from RA's Fiscal Committee showindicates s that NO capital budget has been approved by the Board for the Tetra fiasco this year.  We are concerned that the Tetra expenditures so far have not been authorized by the Board of Directors.

In addition, the report shows an operating income loss of $35,987 already this year (four months).  The 2016 budget for this period shows an expectation of $31,008 in net losses through four months, so current losses exceed budget projections by almost $5,000.  As reported below,  the now year-old Voter's Guide projected a $55,000 net income this year while the latest budget proposal projects a $4,000 operating loss.

A presentation to be made to the RA Board of Directors this Thursday, May 25, 2016, shows that efforts to rehabilitate the Tetra "lake house" Restonians agreed to buy in a referendum last year are over budget by $451,000--approaching a half-million single-year deficit.  (The presentation comprises pp. 67-86 of this week's Board Meeting Agenda Packet.)
The net additional cost to Restonians this year will be $451,000 over this year’s earlier draft budgets for the Tetra fiasco.  The overage represents a 125% increase from the 2016 referendum proforma budget.

But, in fact, the cash flow deficit is $486,269 based on the “final” RA pro forma statement in its Voters’ Guide sales pitch for approval of the referendum last spring, the difference coming from the $59,000 forecast cut in revenues.  Here is how the costs of the Tetra fiasco have escalated: 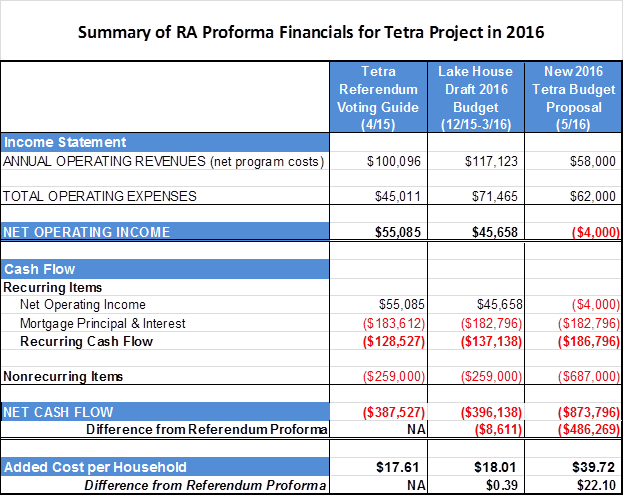 The most important numbers reported above are the added impact on cost per household:  RA voters foresaw an additional likely assessment fee cost of about $18 for this year alone, but not that additional costs per household for 2016 appears to be about $40.  The RA Board will have a hard time living up to its commitment during the referendum to not increase RA assessment fees in 2016 and 2017 due to Tetra costs without jeopardizing other activities or needed reserves.

Nonetheless, that hasn’t stopped the RA Tetra Working Group (aka “Lake House Working Group”) from calling upon the RA Board to add $430,000 to its 2016 budget from RA's Operating Fund this year to make of for the shortfall according to the RA Board materials.  No explanation is remotely offered for why an added capital cost should be taken from the RA operating budget.  In fact, that is absurd and dangerous:  There are good reasons why the two funds are kept separate in any business organization.

More importantly, if funding to cover the massive spending deficit is approved, the Tetra fiasco would add about $22 more per RA member household than was estimated just a year ago—before we voted.

Watch for the substantial increase in your assessment fee next year!  And given the pathetic misinformation offered in the original referendum, we anticipate continuing large deficits in the Tetra fiasco project budget for several years—neither revenues nor operating and capital costs will come close to meeting their targets we believe, meaning Restonians can expect continuing large increases in their annual assessment fee to bail out the Tetra fiasco.

In a broader context, the obviously dubious referendum proforma financials make us wonder about RA’s overall financial condition. Some points to ponder:

At this juncture, virtually every financial figure that RA has presented to the community concerning the forecasting and actual costs of remediating and programming the Tetra property for useful RA functions appear to be questionable.  Indeed, we do not know even the exact sums RA spent in 2015 on Tetra and where those funds came from (as well as the actual revenues) to make the Tetra property suitable for RA use.  Given the poor state of RA’s financial reporting on this project (and who knows what other financial discrepancies may exist), we recommend the following:
Not until the RA Board of Directors clarifies to the community the state of RA’s finances, especially the funding and costs of the Tetra project, does the Reston community have any reason to believe that RA’s financial reporting is accurate.  More seriously, the longer the delay in understanding these multiple unanswered questions, the greater the suspicion will be that RA records are being manipulated in an unprofessional manner.