In what now seems like the distant past of the Reston Master Plan Task Force’s work on Phase 1, members of the task force had a head-snapping moment in one meeting about 2012 when Boston Properties’ Pete Otteni committed Boston Properties to building a performing arts center across the street from the Town Center Metrorail station.  People would actually be able to take the Metro to Reston and walk a short distance to a major theater and see a top-tier stage performance—drama, musical, ballet, opera, you name it!  No one expected Boston Properties to step up and make an unsolicited offer to build a major theater for Reston and the region.

The building of a major performance center was an idea the Reston 20/20 Committee offered in in its paper “Planning World-Class Transit-Oriented Development in Reston Town Center: The Community’s Alternative Vision.”   Reston 20/20 said, “We envision the Reston performing and fine arts center sitting directly south of the Metrorail exit, enabling ready theater access. The center would comprise a substantial performance hall--one seating on the order of 800-1,200 people, a second small (possibly “in the round”) theater for experimental and educational purposes. . . Whether integrated with the performing arts facility or not, the fine arts portion of the center would be large enough to house a quality permanent collection as well as host temporary exhibitions of world-class art. It should also house artist studios and art class rooms on the upper level(s). The studios, in particular, should face south and be open to natural light. It would probably be about the physical size of the National Postal Museum (75,000 SF) in Washington, DC. The fine and performing arts center would adjoin a large park-like plaza with trees, shrubs, benches, and possibly a sculpture garden that could include an underground parking garage beneath the park area that would serve commuters and arts center audiences alike. We anticipate such a theater-museum complex would require about 200,000GSF of development.”

And that offer showed up in Boston Properties’ presentations after the Reston Master Plan was approved.  In a series of presentations to the regional business community, Mr. Otteni presented a concept plan for the development of the area just north and west of the Town Center Metro station featuring a large circular theater just feet from the station entrance.   (See below.)  It appeared that Boston Properties was going to follow-through on Mr. Otteni surprise commitment to the Reston Task Force. 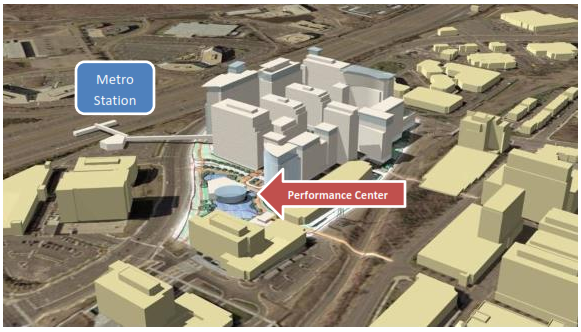 And then, poof, the proposal was gone.  At the April 20th “Reston . . . Blueprint for the Future” community open house sponsored by Supervisor Hudgins, Boston Properties had a new concept plan rendering with nary a sign of any planned proposed performance center.  When asked about the absence of the performance center, Mr. Otteni said that the area (“RTC III”—gray in the rendering above) was the most valuable land in Town Center and that the County had agreed to build a performance center in Town Center North.  Town Center North is, of course, a mile from the station and Mr. Otteni pointed out it would be served by shuttle buses, just like the Kennedy Center.

Subsequently, we checked with a representative of Supervisor Hudgins’ office who said she was unaware of plans to build a performing arts center in Town Center North.  We joked that TCN would be quite crowded with all the County facilities proposed to be built there.  I told her that a knowledgeable attorney told me at the open house that there had been some kind of agreement between the County and Boston Properties to build a performing arts center near the Metro station, but that the agreement had expired.  The Hunter Mill representative was unaware that any such agreement had existed.  Nonetheless, she offered to follow up to find out any details.

So, not only does it appear that a major performing arts center will not be within easy walking distance of the Town Center Metro station, it also means that, if one is built, it will likely be built by/for the County in Town Center North.  And that almost certainly means that it will be managed by the Reston Community Center and funded through added Reston Special Tax District #5 taxes.   To build such a major performance facility would require a huge investment and large operational expense, especially with the many parameters RCC has already laid out as requirements/features of such a performing arts center.  The prospective impact on STD#5 tax rates would be huge.   Of course, as usual, none of this will be publicly disclosed until it is too late for Reston taxpayers to stop if from occurring.

NOTE:  When or if we obtain additional information on this situation, we will update this post and write new ones.