The following is the official public notice posted on the Fairfax County website concerning the conveyance Park Authority land in the Town Center North area to the Board of Supervisors partially for the creation of an urban green.

The Fairfax County Park Authority will hold a public hearing on Wednesday, April 8, 2015 at 7:30 p.m. to receive public comment on the conveyance of property in the Hunter Mill District. The property consists of five acres and is identified on the Fairfax County Real Property Identification Map as Tax Map No. 17-1 ((1)) Parcel 14D, commonly referred to as the “Reston Towne Green property”. The property is located on Fountain Drive in Reston, VA and is located within the same block as the North County Government Center in the Reston Town Center North District.   The hearing will be held at the Herrity Building located at 12055 Government Center Parkway in Fairfax, VA in Rooms 106 and 107.


Conveyance of the property is being considered in response to the Reston Transit Station Area Comprehensive Plan Amendment adopted by the Board of Supervisors on February 11, 2014 which encourages a land use pattern that “incorporates significant new residential development and new non-residential uses to complement the existing and planned public uses and the concentration of employment in the Reston Town Center and a significant new open space to serve as a defining element in the organization of a new, more urban pattern of blocks.” 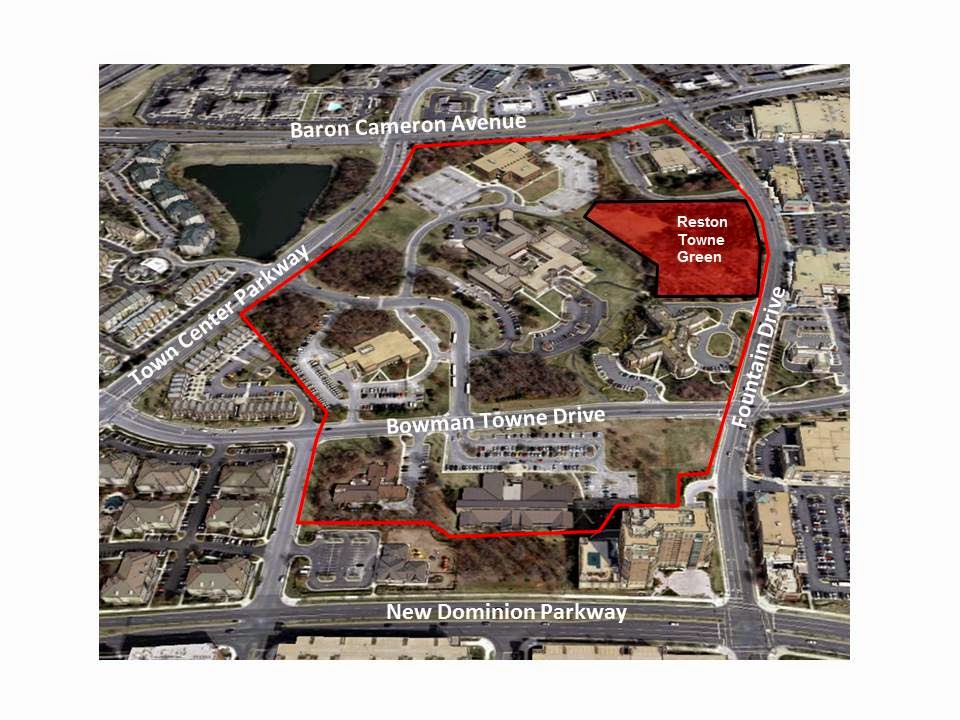 The Park Authority is seeking public comment regarding the proposed conveyance of the Reston Towne Green property to the Board of Supervisors in consideration for a potential two-point-six acre urban Central Green, commitment to provide approximately 90,000 square feet of density within one of the new urban blocks, and other considerations that may be advantageous to the Park Authority mission. It is envisioned that the proposed density would be used for the development of an indoor recreation facility or other recreational use to be operated by the Park Authority.  Additional information about the Reston Transit Station Area, including Reston Towne Center North, may be found online at http://www.fairfaxcounty.gov/dpz/comprehensiveplan/area3/upperpotomac.pdf#page=28 .  The text of the proposed Contract of Sale between the Park Authority and the Board of Supervisors may be viewed at: http://www.fairfaxcounty.gov/parks/plandev/downloads/Sale-Contract-14D.pdf.  Additionally, paper copies of the Contract of Sale are available in the Herrity Building, 12055 Government Center Parkway, Suite 927, Fairfax, VA.

Park Policy 210, Disposal of Land or Facilities, requires a public hearing be held prior to the Park Authority’s decision to dispose of land or facilities. If you wish to speak at the hearing you may sign up in advance by calling the Public Information Office at 703-324-8662 or via email at parkmail@fairfaxcounty.gov.  You may also sign up at the hearing.  Organizations may have one official speaker for five minutes; individuals may testify for three minutes.

Written and e-mail comments will be taken now until April 7, 2015. Written comments may be sent to David R. Bowden, Director of Planning  & Development Division, Fairfax County Park Authority, 12055 Government Center Parkway, Suite 406, Fairfax, Virginia 22035.  Email comments should be sent to: parkmail@fairfaxcounty.gov   The Park Board will consider public testimony from the hearing on April 8, 2015 and vote on the matter at their regular Board meeting scheduled for that same night.

For more information contact the Public Information Office at 703-324-8662.


Here are the available attachments:

The only comment we can offer at this time is that the sales agreement asserts that the agreement will enable the construction of a 2.6 acre urban Town Green out of what is now FIVE acres of undeveloped FCPA parkland as well as an indoor recreation center paid for by the County, not by the Reston residents of the local special tax district.  In short, Reston will lose some open space to garner a County recreation center.
Posted by Reston 2020 at 3:10 PM