Boston Properties didn't get the word: They want to TAKE park space in Town Center.

Important Update:  The BP proposal will not be discussed at Monday's Reston P&Z Committee hearing as noted below.  The next opportunity for your public input will be at the County Planning Commission hearing on June 11 at 8:15PM.  The following from the Hunter Mill Highlights newsletter provides the relevant information:


Block 4 LLC and Reston Town Center Property LLC (Affiliates of Boston Properties) have filed development Plan Amendment (DPA 85-C-088-07), Proffered Condition Amendment (PCA 85-C-088-09), and Planned Residential Community (PRC 85-C-088-03) plan to develop what is currently a surface parking lot and redevelop a portion of the existing low-rise office and retail in the Town Center Urban Core with a mix of residential, office and retail/restaurant located at Fairfax County Tax Map as 17-1 ((16) Parcels 1 and 4, and 17-1 ((16)) Parcel 5A.  The Planning Commission public hearing is scheduled for June 11, 2014 at 8:15 p.m.

The minutes of the last Reston Planning and Zoning (RP&Z) Committee, March 31, 2014, describe a presentation by Boston Properties (BP) to the RP&Z to build a high-rise residential structure on the current surface parking lot in the northeast corner of Town Center.  As part of that development, BP wants to take 60' linear feet--one-third--of the adjoining President's Park, land it had previously committed to sustaining as park space.  And, oh yes, why not add 1,000 parking spaces in this so-called transit-oriented development.

BP is making a fool of County decision makers who say they want transit-oriented development (TOD), but are unwilling to limit parking growth or ensure adequate park or other open space, and the community in which it operates by acting as if it answers to no one but its shareholders.

Here is the area we're talking about: 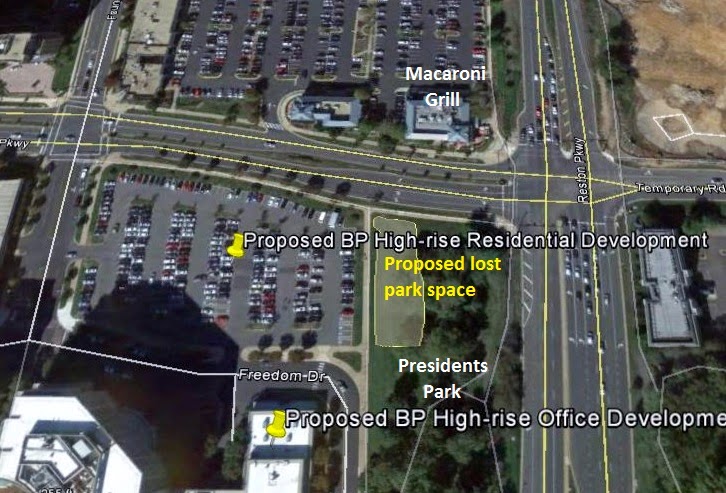 Here are the minutes of the March 31, 2014, including the BP presentation discussion.  There were a number of questions by members of the RP&Z on the park taking and other development issues that are inconsistent with the plan for the development of Reston's station areas.  The section on pp. 2-4 highlighted by a box text include the BP discussion.

The whole BP presentation and Q&A point out unequivocally that BP cares nothing about the community its properties are in; only about the profits those properties might make.  Moreover, it can not be trusted to keep its word about a matter as straightforward as setting aside land for parks in urbanizing areas.

More generally, BP's actions raise a legitimate question about whether the County can trust developers to honor their commitments in proffers to preserve park land for public use.  From BP's example, it appears that we can not.  Moreover, it points strongly to the need of the County to use more stringent measures to acquire public ownership of needed park land, including the use of eminent domain, rather than trusting development companies to meet public needs.

While no RP&Z recommendation has yet been made on this project, the Reston community must step up and express its concern, if not outrage, as this proposal.  The next opportunity to do so will be at next Monday's RP&Z meeting, 7:30PM, Monday, May 19, 2014, at the North County Government Center Community Room.

For earlier reporting on this proposal, please read these news articles presented in chronological order:
Not surprisingly, none of these articles mention the taking of Reston urban park land to build high-rise buildings.  Do you suppose that BP really didn't want the public to know about their plan until they had to go through the re-zoning approval process???