When RCA revived the Citizen of the Year award in 2008, we intended to spotlight the terrific work done by community volunteers who too often go unrecognized.  This year’s selection, Kathy Kaplan, definitely falls in that tradition.  I was pleasantly surprised by the number of people who complimented me on our choice.  I told them that Kathy deserves the credit; she’s the one who’s been working for the community for decades.  But nonetheless, I was glad to give Kathy some well-deserved accolades at our ceremony Monday night. 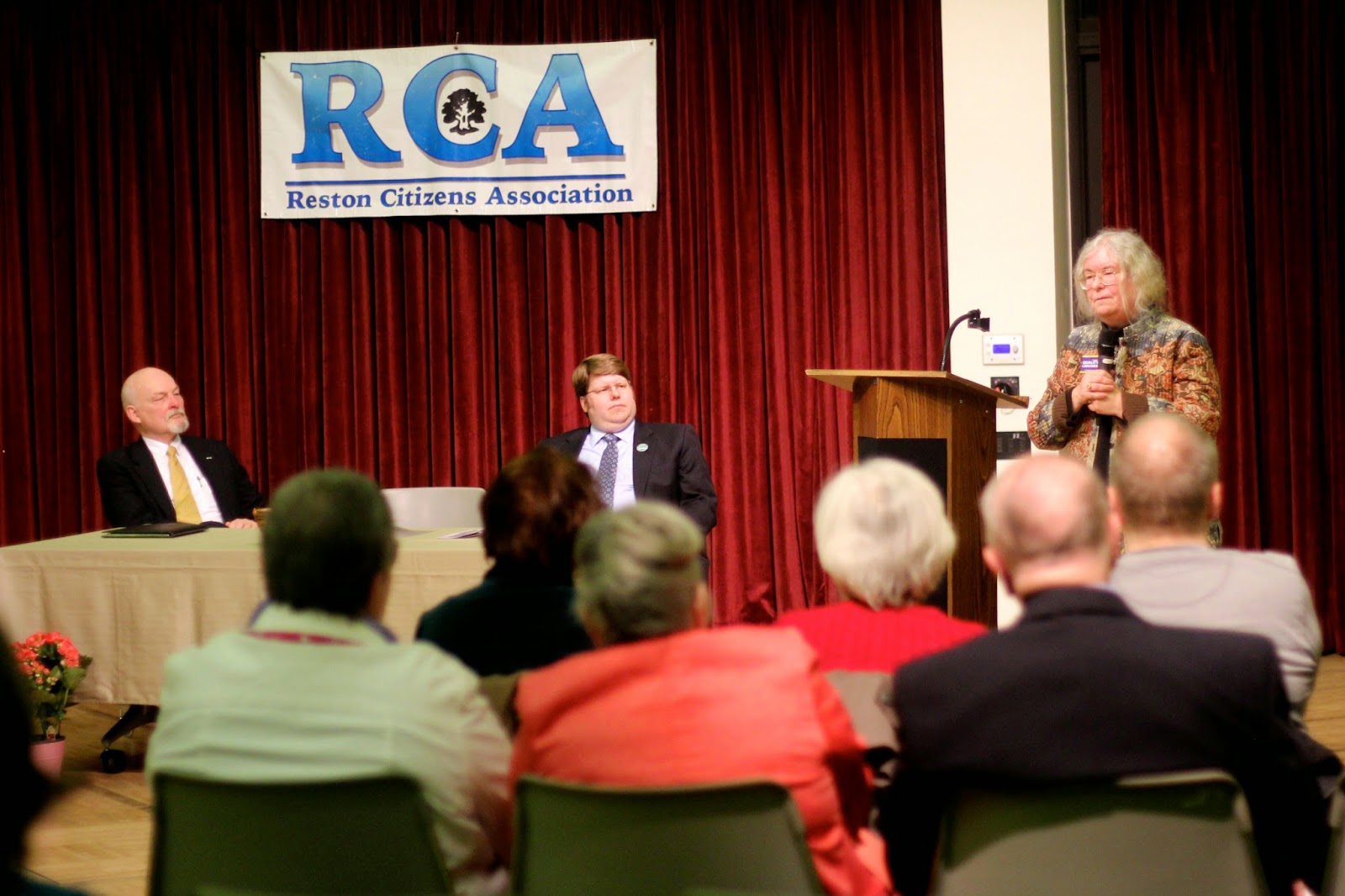 Kathy reminds me of our 2011 Citizen of the Year, Nick Brown.  Both are modest folks who prefer to work behind the scenes, avoiding the spotlight.  I was glad we turned the spotlight on Nick then, just as I’m glad we gave Kathy recognition this time around. 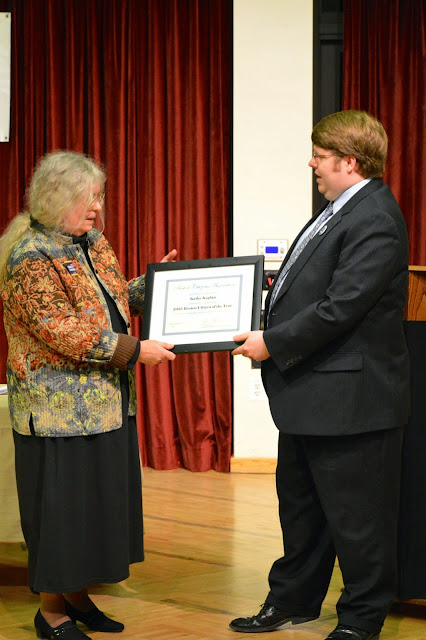 In my opening remarks, I noted that Kathy shows what individual citizens can accomplish through hard work and a dedication to the community’s best interests.  If it hadn’t been for her love of libraries and her willingness to pore through long and complicated government documents, we might never have heard of the Beta Plan, the book culling, or the budget cuts to our County library system.  It’s easy to believe that individuals are powerless against big institutions; Kathy showed that it’s not true.
RCA’s Terry Maynard, who nominated Kathy for the award, began with an excerpt from a letter Kathy wrote last summer, discussing a book of poetry she found at the library and expressing her fear that it would be thrown away, like thousands of other County library books in recent years.  For Kathy, the fate of our libraries isn’t an abstract concern; it’s personal.
Terry then walked the audience through all that Kathy did, from reading thousands of pages about the County’s library plans, to writing letters to County officials opposing the library cuts, to reaching out to librarians and library friends groups, to meeting with County supervisors, to gathering over 2,000 signatures on an online petition calling for the library system to re-evaluate its Strategic Plan.
Clearly, it took a lot of people coming together to convince the Library Board and the Board of Supervisors to stop the Beta Plan and the destruction of books.  But as Terry’s speech made clear, there may be no single person who did more than Kathy Kaplan.
Kathy’s library efforts were the focus of the ceremony, but she has contributed much more to Reston than that.  The next two speakers celebrated some of Kathy’s other good works in the community. 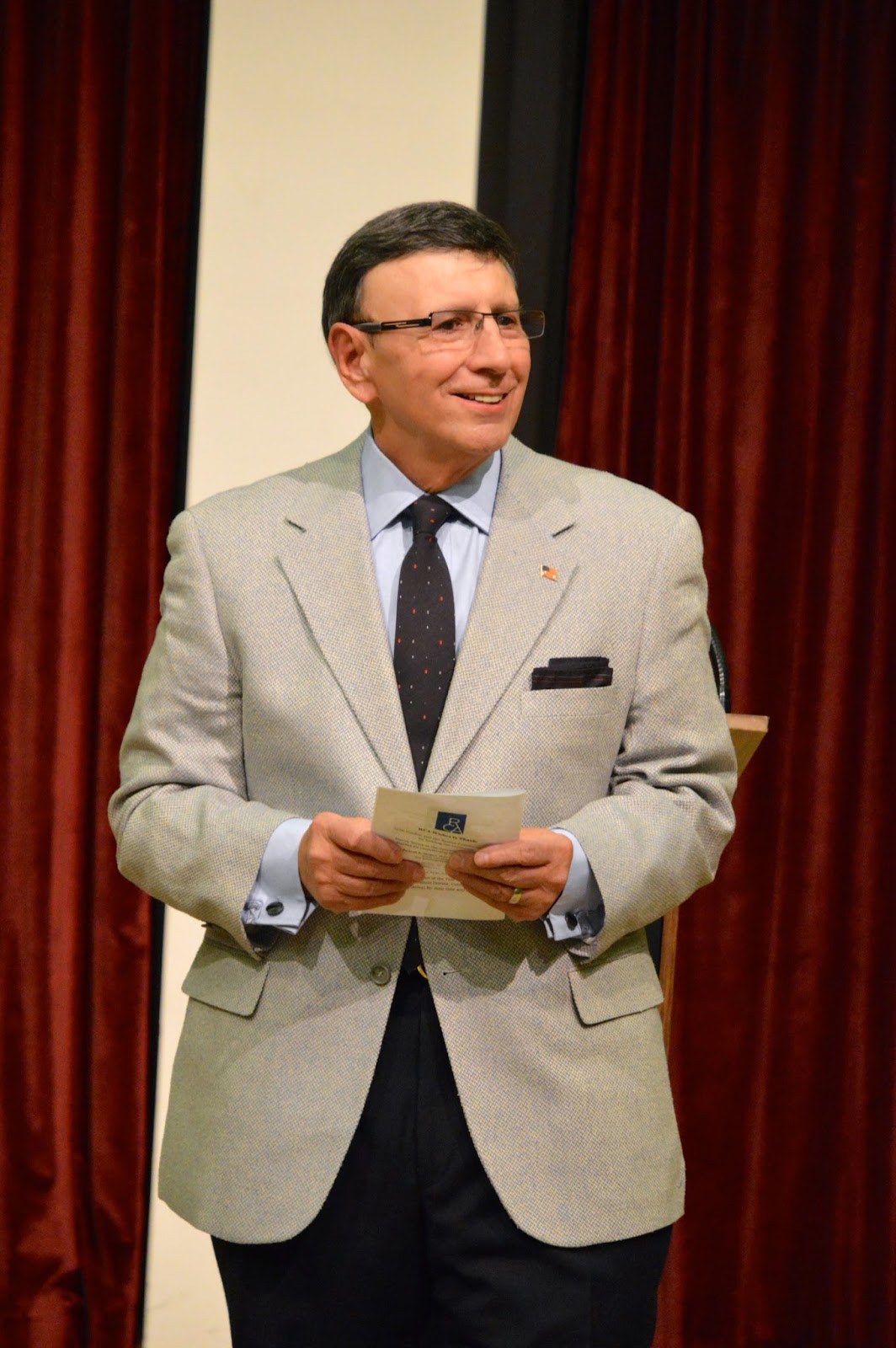 ARCH President Jerry Volloy gave a very emotional speech about Kathy’s contribution to the 9/11 memorial at Brown’s Chapel Park.  He described how, as RA CEO, he led an effort to create a memorial to that awful day (2 Restonians lost their lives in the attacks).  He explained that they created a row of trees and bushes to create a memorial garden, and how the bronze plaques sculpted by Kathy provided the perfect complement to the natural beauty on display.  He noted that one of the plaques included an image of a caterpillar and a butterfly, to symbolize the renewal of life.  Kathy is an artist as well as an activist, and Jerry’s tribute was a fitting celebration of that side of her. 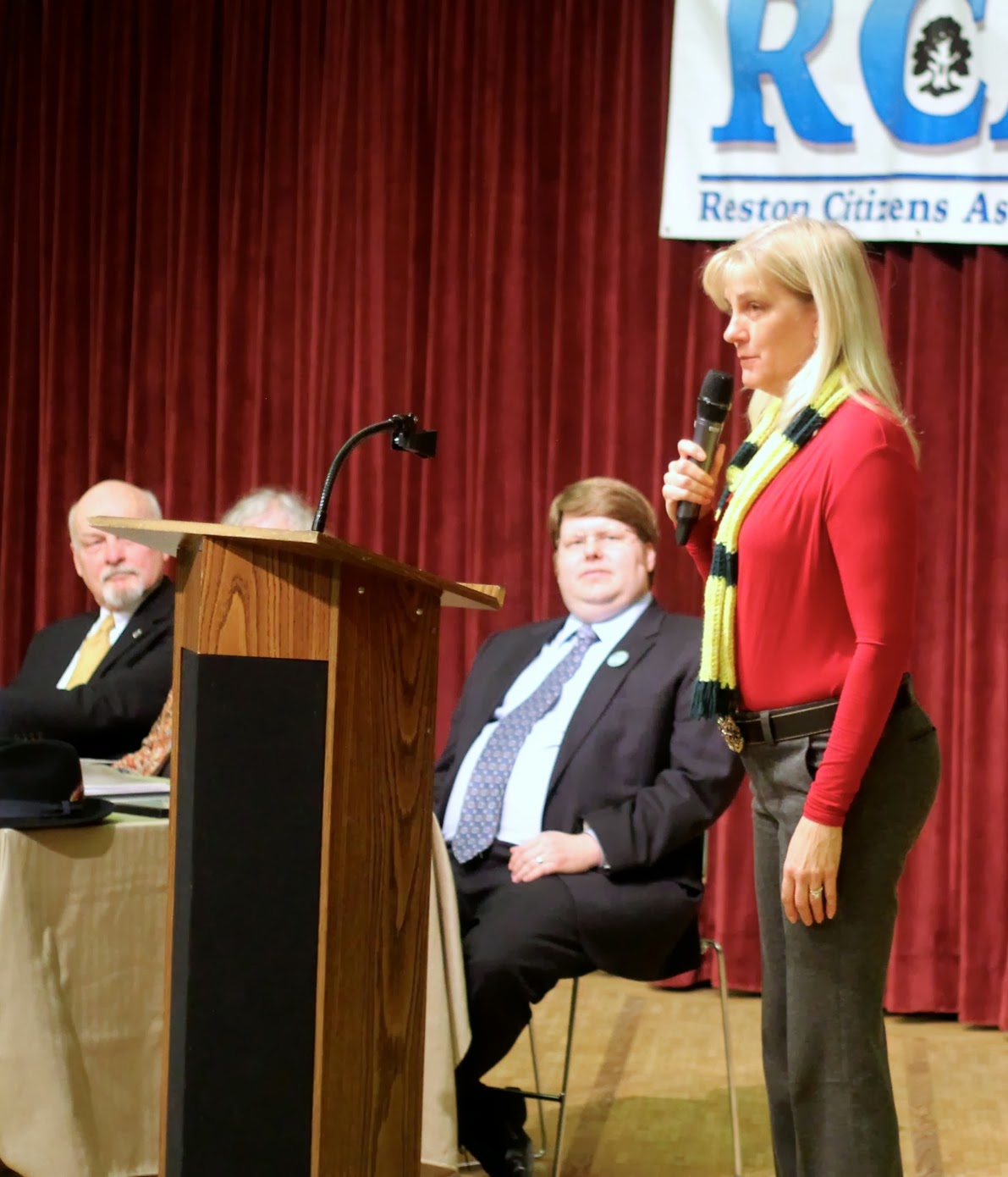 After Jerry spoke, up stepped Connie Hartke, who is on the boards of both RCA and Rescue Reston, the group fighting to save the Reston National Golf Course.  Connie described how nervous she was when she first became active with Rescue Reston a year ago, because she wasn’t up to speed on community issues.  Kathy helped her get informed, and provided invaluable research and information to Rescue Reston.  Connie noted that two of the community’s most valuable assets are the Freedom of Information Act and Kathy, who knows how to use it. 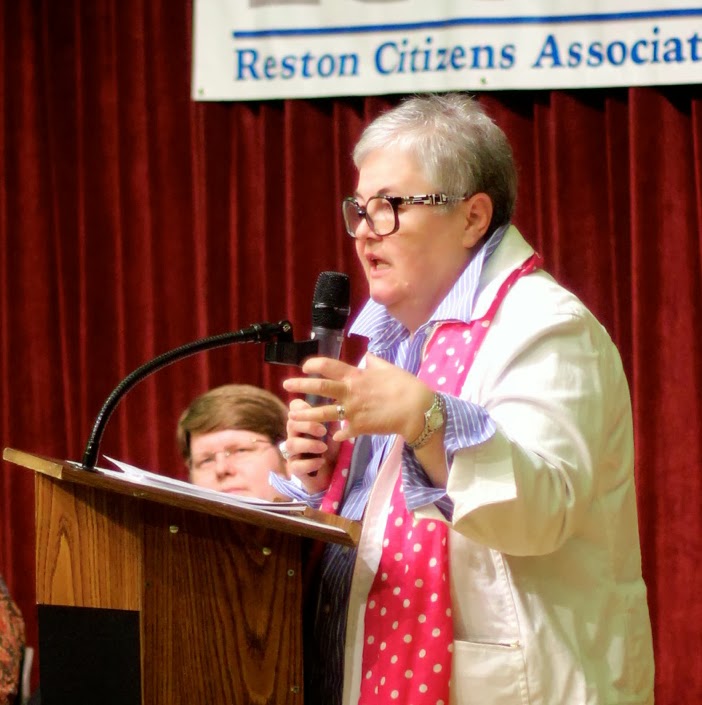 RCA’s Tammi Petrine spoke next; she noted that not only does Kathy read those long and boring documents most of us can’t be bothered with – she understands them!  A valuable skill indeed.  Tammi updated the audience on the ongoing threats to the library system, including a resumption of the book culling and further budget cuts.  She urged everyone to stay involved and continue to support our libraries and our librarians. 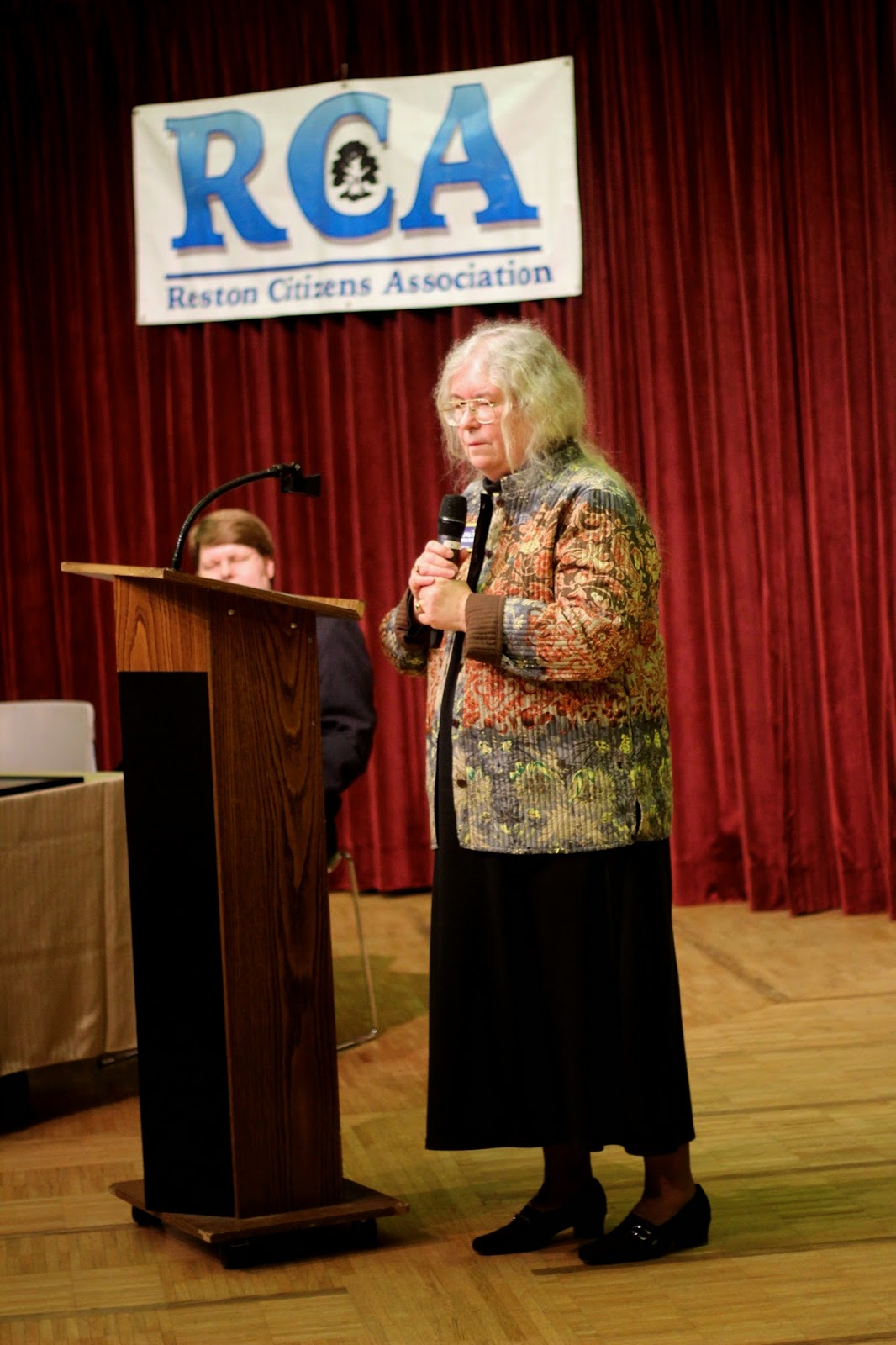 When Kathy spoke, she emphasized the importance of libraries in her life.  She grew up in a town where the nearest library was 10 miles away, and she walked there if she had to in order to get her fill of books.  (She described “The Summer of L. Frank Baum,” when she read all the Oz books.  When she moved to Reston in 1983, she treasured our library; even though it was tiny, she took home a giant stack of books every time she went.
Kathy noted that the real heroes of last year are the librarians, some of whom were in attendance to celebrate her award.  She praised them for having the courage to stand up and comment at meetings, and to write letters in their own names, even at the risk of retribution.  She herself, she said, just “caused as much trouble as possible.” 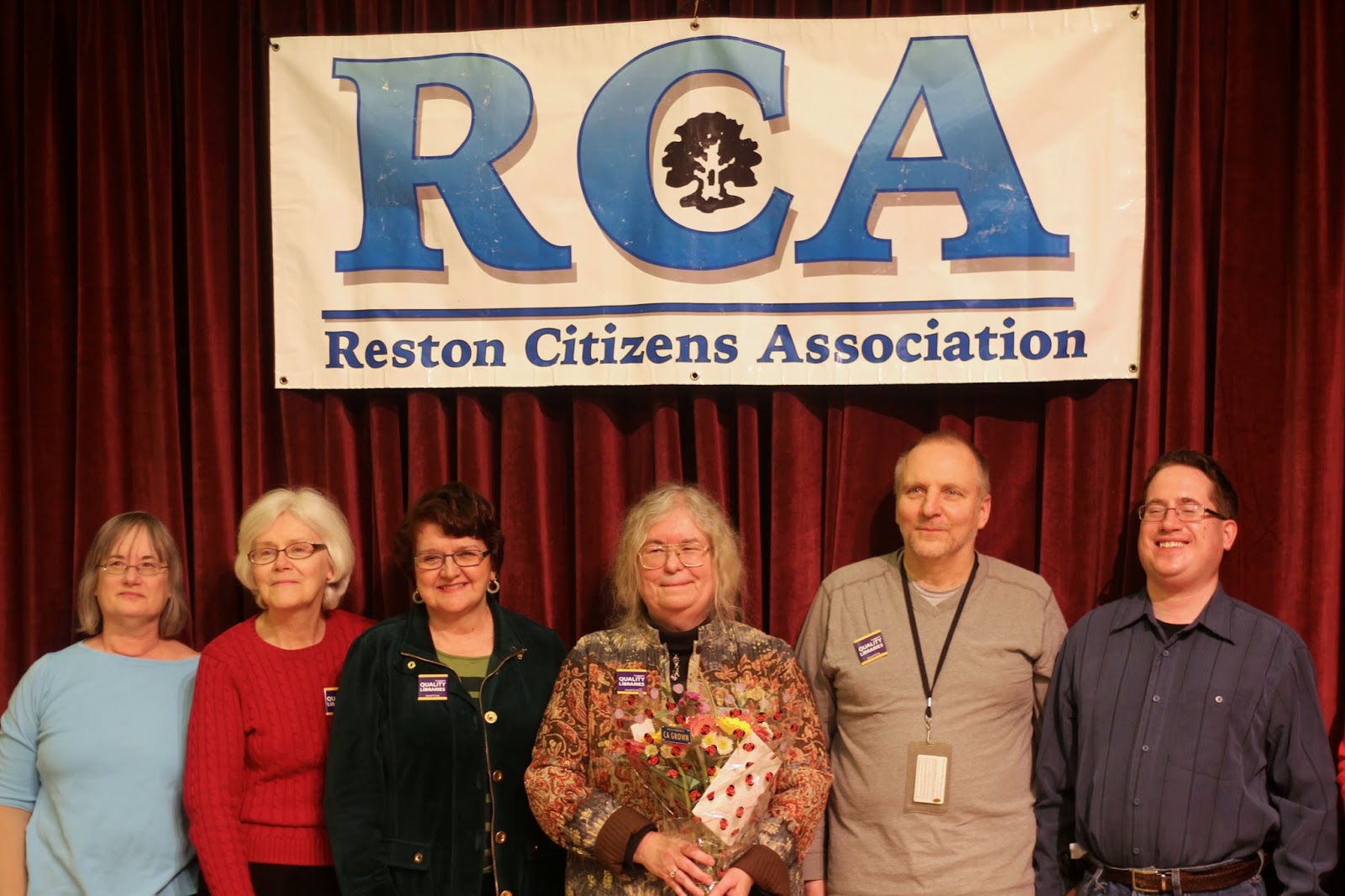 Those of us who know Kathy know how good she is at causing trouble.  And thank goodness for that; a healthy community needs citizens who aren’t afraid to make noise.  We need the Kathy Kaplans of the world, people who are willing to slog through official records and speak out when they see something wrong.  Engaged citizens like Kathy keep our officials honest, and make sure that our institutions keep the best interests of the people at heart.

Thanks to Terry for a thoughtful nomination.  Thanks as always to Leila Gordon and RCC for hosting the event and displaying the award plaque.  And a special thanks to the Harris Teeter over at the Spectrum and Wegman’s in Fairfax for their contributions to the food for our reception.  And congratulations to Kathy Kaplan, a quiet woman who knows how to make noise, and who might just have saved our library system.

Email ThisBlogThis!Share to TwitterShare to FacebookShare to Pinterest
Labels: Citizen of the Year, RCA, Reston Library