Carol Hadlock spent 4 1/2 years monitoring wildlife at Sunrise Valley Nature Park, during which she documented 122 species of birds, 33 of which nested there. "Right there, that says to me this is a very special place," she told the group of about two-dozen Reston leaders and nature enthusiasts who took a tour of the park on Wednesday, March 31. As more of the surrounding area has been developed, some of the larger species have moved on, but about 22 species still nest there, which is remarkable for such a small property, she said.

The park comprises naturally occurring wetlands, manmade wetlands, a restored farm pond and uplands buffers. The manmade portion of the marsh, which was created under a mandate from the Army Corps of Engineers to offset damage to wetlands elsewhere in Reston, makes up about 3.3 of the park’s nearly 16 acres. 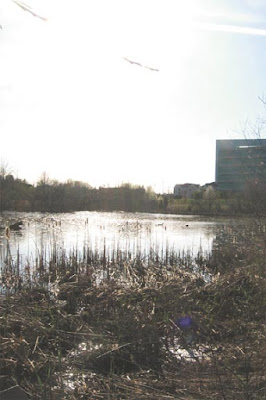 A CONSERVATION COVENANT with the Corps of Engineers protects the property, but the site is only a few hundred yards from the location of the future Herndon-Monroe Metro Station, and the county encourages high-density development in the vicinity of Metro stops. . . .